Yesterday’s double header saw battling performances as both Brighton teams took the win, the A-team Allstars defeating Team No Fuss whilst the B-team Rockerbillies (plus guests from Eastbourne’s Bombshells) triumphed over Team Dragon. We’ll have a full report on these matches, along with belated write-us of earlier games against Croydon and Eastbourne, in the next few days. Meanwhile, there will be a few copies of our fanzine from yesterday on the flyers shelf in the Evening Star from late evening today. Or simply click on the cover image above to read the online version. This issue saw Turn Left become the (tied) longest running British roller derby magazine of all time! Inside you’ll find interviews with members of all four teams, a report on the Rockers at Brighton Pride, an interview with our mysterious advertiser Mr Séamus, a roller derby I-Spy game and more. Special thanks to all our lovely interviewees, photographers, and our awesomes advermatisers including http://www.meadowyurts.co.uk/ and http://www.thewick.pub/ Yay! 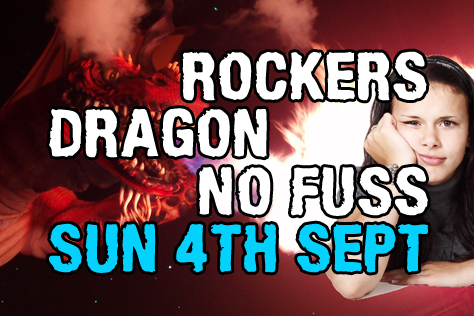 This Sunday (4th September) sees the Brighton Rockers hosting an epic double header at the Dolphin in Haywards Heath. Both Rockers sides will be facing challenge teams composed of skaters from various different home leagues. The A-team AllStars are facing a super tough Team No Fuss roster, whilst the B-team Rockerbillies lock toe-stops with a very different Team Dragon squad to the one that defeated the AllStars at the Dolphin in February of last year. One aspect in which challenge teams differ from home leagues is that Flattrackstats, whilst recording (some) challenge team scores, doesn’t include them in any rankings system. As a result, their computer won’t come up with predicted win percentages or scorelines for games involving challenge sides. So we really have no idea what’s going to happen in the games. You’ll have to pop along to find out!

VENUE & AFTER PARTY INFO
Doors open at 2pm with the A-team game up first at 2.30 and the B-team battle following at around 4.30. Tickets are £10 for adults, £8 students and free for under 12s. Online sales have closed, but tickets will be available on the door. The Dolphin is about seven minutes walk from Haywards Heath station (turn left and follow the signs on lampposts) and Southern have forgotten to have any Sunday engineering works affecting the station this week yay! There’s parking at the leisure centre and a big Sainsbury’s (shuts at 4pm) between the venue and station if you need supplies. You can’t bring in your own booze, but there will be a table selling beer, wine and cider in the hall. The after party takes place at the Star pub at the bottom of Broadway, about 15 mins hike from the leisure centre (walk back past the station and hang a right).

TURN LEFT – THE ‘HISTORIC’ ISSUE 16
Sunday sees our tawdry Brighton Rockers fanzine become the (tied) longest running – in terms of issues – British roller derby magazine of all time. The only place you can pick up this (obviously historic, yeah?) sixteenth issue of Turn Left is on the door at the venue. As ever the magazine is free of charge. Inside you’ll find interviews with members of all four teams, a report on the Rockers’ Brighton Pride shenanigans, the inside story on our mysterious advertiser Mr Séamus, an ‘I-Spy at a Rockers Game’ contest, and more. Enough shameless self-publicity, what can we expect from the games themselves? We’ve no idea. Luckily, we spoke to some people who do. Here’s brief extracts from our fanzine interviews with the teams taking part… 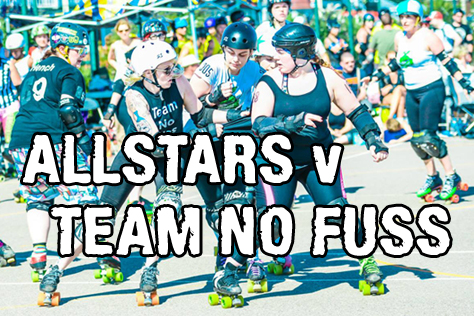 2.30PM – BRIGHTON ROCKERS ALLSTARS v TEAM NO FUSS
Founded by former Bourne Bombshells bench coach (and most recently manager of men’s Team England) Polka Dotty, No Fuss these days includes skaters from across Sussex, Kent, Hampshire, Essex, London and far beyond. This will be the first time a No Fuss team has faced a Brighton side, at least in public. With a huge roster of skaters on their books (70+) it will be interesting to see who takes to the track for No Fuss today.

GIN ATOMIC (BRIGHTON ROCKERS)
“I also play for Team No Fuss, but I’ll be rocking the Brighton blue and black today. Looking at the No Fuss roster, it’s a beast of a squad. Look out for Mother Mercy – she’s hilarious and my favourite thug. LRG’s O’Malley is brilliant with mad skills. Evil Badger is another super solid skater. From a Rockers perspective, we’ve got old favourites and new. There’s Shambolic with her crazy fast spinny footwork, Emma the Condemner’s brilliant defense… We’ve also got some new transfers from Finland and France taking part today. Finn McCruel joined us from Helsinki Roller Derby, whilst Velvet Bottom comes from Roller Derby Rouen. Both have played derby for many years. I think they’ll quickly establish themselves as crowd favourites. I won’t make any predictions for the score. People will score points. I hope I score some of them.”

DROPKICK MOLLY (TEAM NO FUSS)
“No Fuss now have over 70 members from between ten and fifteen different leagues. We are mainly from the South but fairly spread out, and have recruited some talent from a bit further North. Today we have a very strong, although not fussy, roster. Not that we are fussed, but we’re expecting some tough derby from Brighton. I’ve come up against them a couple of times with my home team Portsmouth and they form killer walls and have awesome skaters. I’ll be watching out for our No Fuss teammates, some real double threats on track from Brighton. Gin Atomic is always one to watch.”

4.30PM – BRIGHTON ROCKERBILLIES & GUESTS v TEAM DRAGON
The day’s second game sees the Rockerbillies joined by several skaters from Eastbourne to take on Team Dragon. TD were founded by former London Rollergirls Recreational League bench coach Max Rees. Although Max has since moved to Canada, the team still has LRG rec league skaters at its score. This game is a Brighton swansong for B-team captain Van Hayley, who is transferring to Bristol Roller Derby.

THE PHILOSOFEAR (ROCKERBILLIES GUEST)
“Five Eastbourne skaters (Bullet Bomber, Hell Block H, Amazing Graze, Drag N Fly and myself) are all playing for the Rockerbillies today. We got an e-mail asking if any of us were free to skate as they were a little low on skaters. We jumped at the chance – there were about ten of us who wanted to play! In the run up to today we’ve attended their training a couple of times, so that we can be on the same page with regards to tactics. The Eastbourne skaters playing today are a mixture of blockers and jammers. Bullet Bomber is a great double threat and always one to watch. At this year’s Extreme, two Rockerbillies who impressed me were Mighty Mouse and Hippy Hippy Skate. Mighty Mouse’s jamming was fast and agile, whilst Hippy Hippy Skate is amazing at pushing walls forwards out of play – she was very hard to hold back! Max Rees who set up Team Dragon also used to bench coach the Bombshells. As a result we’ve played against them quite a few times. I’ve also played against TD before with Team No Fuss and Team Crazy Legs, though I’m not sure who is playing for the Dragons today.”

VELOCITY KENDAL (TEAM DRAGON)
“Only one of our skaters (Long Tall Scally) played for Dragon against the Rockers A-team last February. Since then we’ve recruited a whole host of new talent who will hopefully impress. Keep an eye out for Dragon’s famous cool, calm and collected style. Unusually for a challenge team, most of TD get to skate together on a semi-regular basis. Because of the nature of our derby background (mostly recreational skaters) we still face challenges when skating as a team. We don’t get to train together in packs and practice specific tactics, but we have the advantage of knowing each other on and off track, which really does help create that team feeling. We expect to be thoroughly challenged by the Rockerbillies today.”